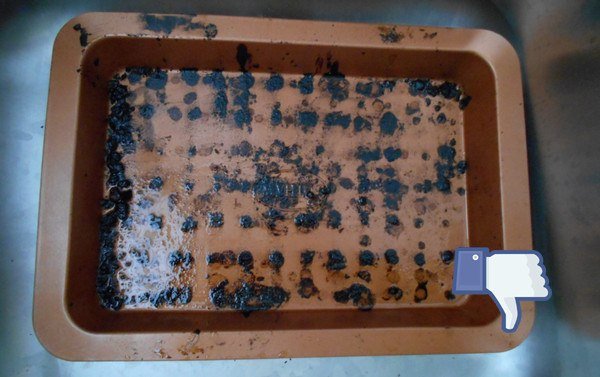 This bacon bonanza promises to be super strong no-stick bakeware and it FAILS!

Luckily, I purchased the Gotham Steel Bacon Bonanza pan on sale… and why not give it a try. They claimed it cooks up to 12 slices, and I quit buying the lower priced bacon at Costco and now purchase only the thicker slices.

The lower priced bacon, I found that I needed to cook 2 slices together else the bacon would simply disappear once cooked. Yeah, the slices were THAT thin. Besides that the price savings was lost on the thinner slices too.

Now, getting back to the Gotham Steel Bacon Bonanza, initially it worked great for me, though I have to admit, the pan did start to get permanently marked right from my first use.

On top of that, I had to take my bacon out of the pan and place it on paper towels until it cooled.

Once cooled, I noticed the bacon was not cooked thoroughly enough… leastwise, not for me. I like my bacon cooked CRISP… so crisp that if you touch it, it will crumble.

If you ever gagged on a piece of bacon as a kid (which I did), then you would NEVER eat under cooked bacon ever again either.

Anyway, by the 4th use of my bacon bonanza pan… well… I am extremely disappointed with pan, and that is putting it nicely. As you can tell by the image at the top of my post here, this pan is now most likely WELL marked. And, this picture was taken AFTER I had scrapped off the excess burnt droppings with a plastic lifter that is meant for using on non-stick pans.

This mess would NEVER be resolved by simply putting it in the dishwasher, as the manufacturer claims this pan is dishwasher safe. OKAY… but the dishwasher won’t be able to clean this mess that IS for sure.

After much soaking and scrubbing, I’m sure this time the pan will be REALLY badly marked.

UPDATE: after scrubbing the pan clean, it wasn’t as badly marked as I had anticipated it would be. So, if you’re interested in having this bacon tray for yourself, it might still be worth it at $15 Canadian dollars. 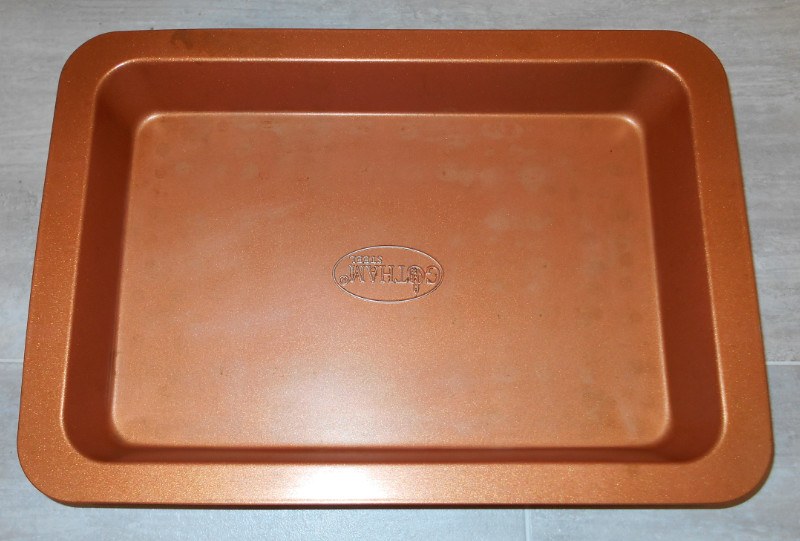 The 20-25 minutes for cooking at 400°F took my bacon 35 minutes to cook and I STILL had to place the bacon in my microwave oven to finish cooking it.

To top THIS off, I have a heck of a messy oven… AGAIN! I just cleaned up my oven from the LAST time I cooked bacon.

This time, the bacon curled over the edges of the pan, dripping grease out onto the bottom of my oven. WOW, what a mess! 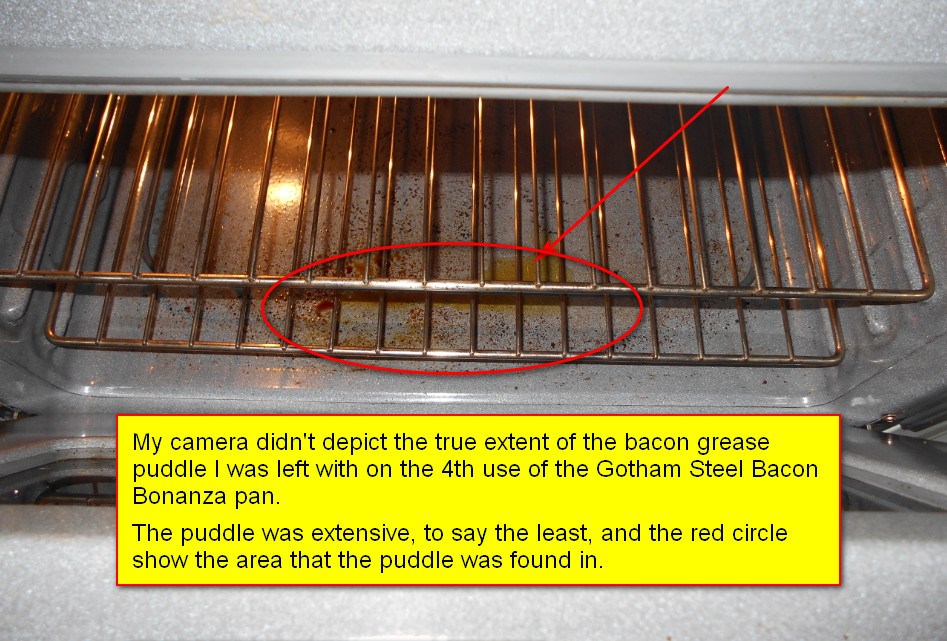 This picture really doesn’t show the full amount of clear bacon grease that is allllll over the bottom of my oven.

Now, not only am I left with a heck of a messy oven… AGAIN… but also the cost of paper towels when having to finish the cooking of the bacon in the microwave.

Thankfully, I still have my original broiler that came with my stove, so I will go back to using that once again. I have to agree with the fella (sounds like he is saying Ron Aspires

to me) in the video below, bacon needs to be laid flat in order to cook properly.

This Gotham Steel Bacon Bonanza Copper really does FAIL with their overstated promises!

I was so fed up and done with this product after this usage that I tried going back to my oven broiler. Figured the broiler would at least restrict the bacon grease to the pan itself, as well as cook my bacon properly, without singeing the top edges like my bacon was, even though it was only partially cooked.

BOY! Was I wrong.

On 25th April, I brought out my broiler and proceeded to wrap it with barbecue-strong, aluminum foil, all the while thinking how clever I was for diminishing issues with burnt on food. I then placed my bacon strips nice and close to each other and put them in my oven, setting the oven on broil. 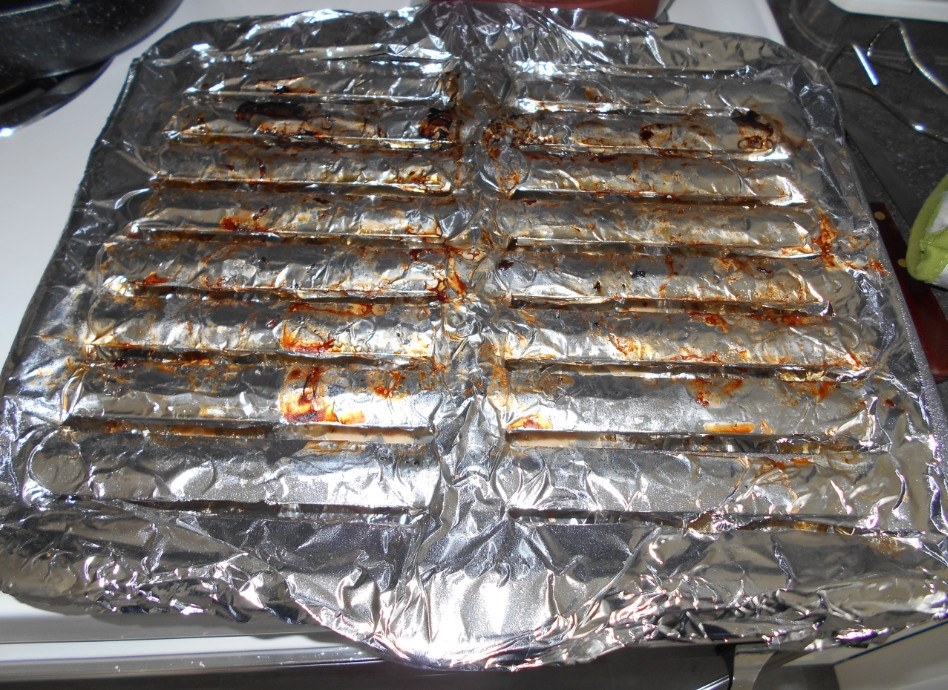 Not long into the cooking phase and my smoke alarm let me know that it was not very happy with the small amount of smoke that broiling my bacon was causing. Here I am… in the middle of the lockdown and my smoke alarm starting to scream. Sheesh, all I needed was to have the fire department at my door… NO THANK YOU!

I opened my two kitchen windows, fanned the smoke alarm to get it to stop screaming and used one of my cupboard doors as a fan, opening and closing it, causing the air to go toward the kitchen window and out. HA! What a joke.

Once my bacon was cooked… well, check out the image below. So much for cooking my bacon FLAT, huh! 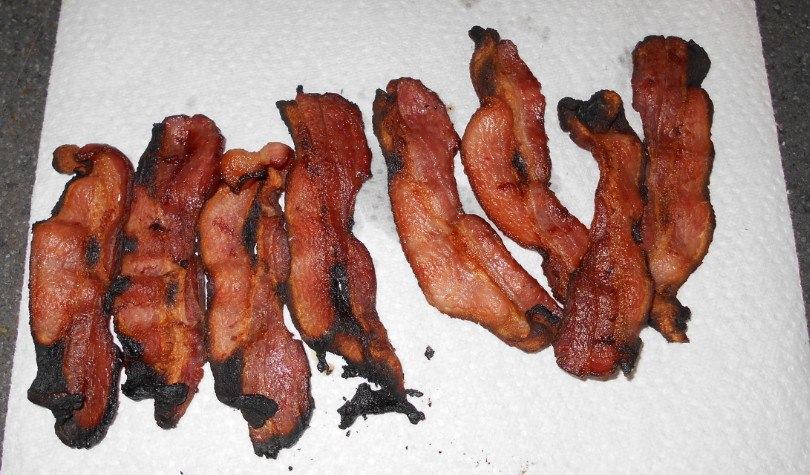 Needless to say, this bacon was NOT thoroughly cooked, did NOT stay flat and, after breaking off the singed edges, I had to put these strips in the microwave to finish cooking them.

That’s when I dug out my Gotham Steel Bacon Bonanza Copper once again (I had it set aside to get rid of, but not any more!) and I placed the remaining bacon strips from my package that remained to be cooked into that pan.

Then I placed the Gotham Steel Bacon Bonanza Copper pan onto an old cookie sheet I use when baking pies to handle over spills… and placed it into my over set at 400°F.

The strips of bacon from the Gotham Steel Bacon Bonanza Copper pan (shown in the image below) came out of the microwave, relatively flat… flatter than the broiled pieces, I assure you. PLUS… no singed edges. 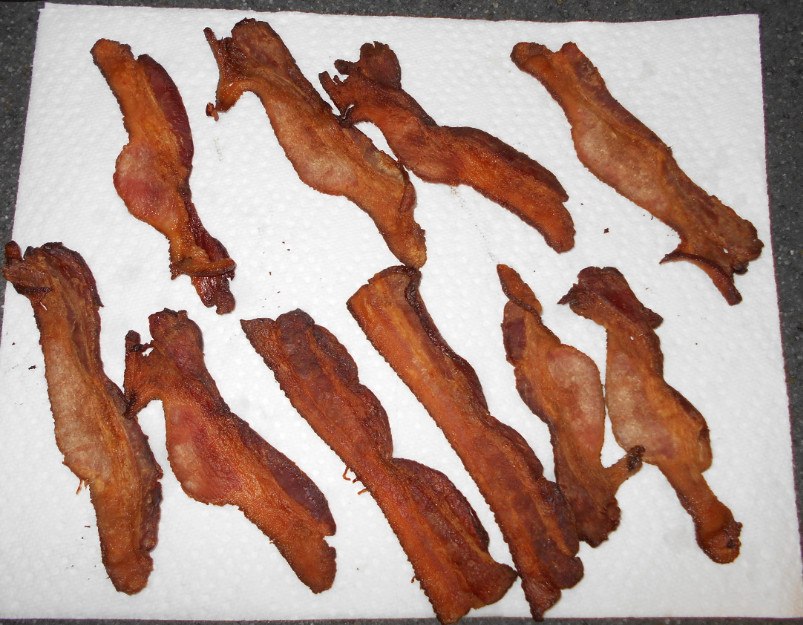 So, though this non-stick product FAILED all promises made… it appears to be my best option for starting to cook bacon from now on.

At least this way, I get to keep my bacon drippings for cooking (Crisco is NOT what it used to be and I won’t use it anymore), and my smoke alarm will be happier than my using either a frying pan or my broiler for cooking bacon.

Just GLAD I only paid $15, especially given that Ron (in the video above) probably paid a whole lot more for his.

UPDATED 13 June 2020: After using this pan ONE more time, the copper coating is now starting to come off once I soaked the blackened spots from the pan portion.

Also… discovered that you need to PUSH the bacon slices down into the top portion of this pan. Setting it in place is not enough, you really need to give each piece a little push down into each slot made for the bacon to rest in while it cooks. Though the grease will splatter allllll over your oven, there should be less dripping going on over the edges… or, you could place an old cookie sheet on your oven rack just below the bacon pan, in order to catch any over spill.

Have been cooking the extra thick bacon slices for 35 minutes in a 400°F, taking the bacon out and placing it on paper towels. Then once the entire package of bacon has been in the oven once, I place all of the bacon, on the paper towels, into my microwave for 5 minutes (a bit more when necessary) and the bacon is lot flatter, and not burnt, as I had been experiencing.

My concern now is WILL the bottom pan last, due to the copper coating starting to be removed once blackened spots are soaked off. Time will tell. 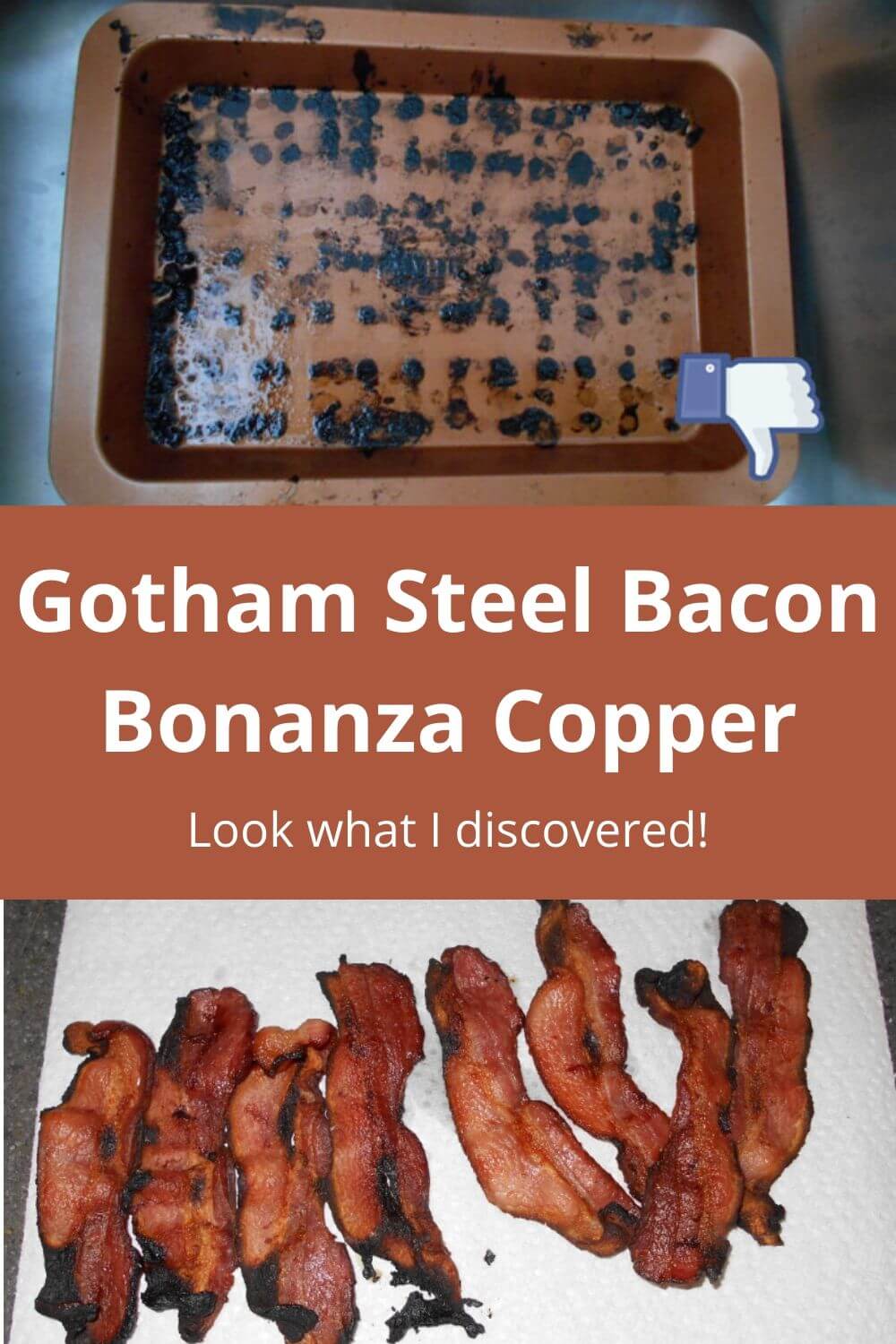 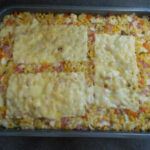