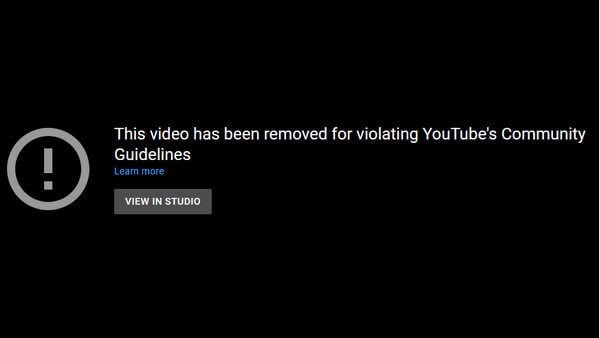 On the 9th of February 2022, after chatting with my cousin who lives in Saskatchewan, I created a short video that is all of 2 minutes long, showing a box of face masks and sharing what the warnings state on the side of the package.

Not sure when YouTube slapped on their banning of this video, but it looks though it MIGHT have had something to do with my title… which only repeated what is on the side of the box as the number 1 warning.

On the evening of the 10th of February, my cousin called me again, saying that she’s not shocked that YouTube banned my video, and I retorted with… WHAT?

Needless to say, I wasn’t even aware that they’d banned my video.

Off to my office I went and opened my videos on my YouTube channel, and POOF! I got the following pop-up straight away, stopping me from even viewing my videos. 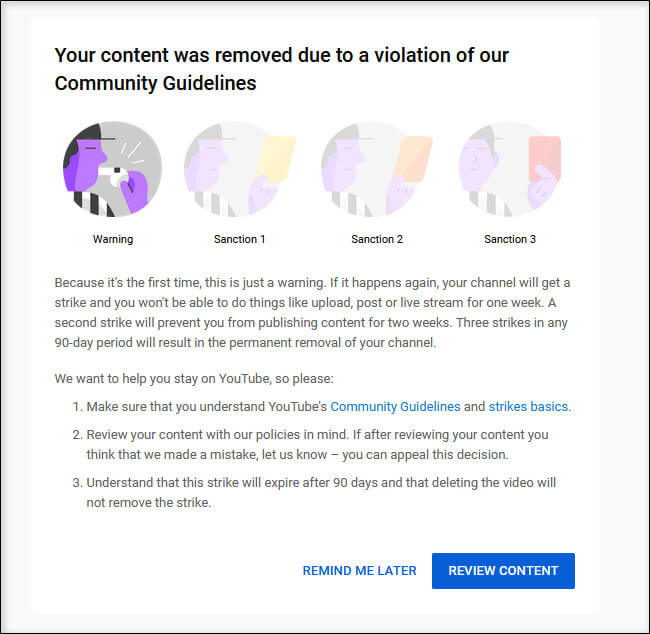 So, I clicked on the Review Content button and YouTube claimed my video is considered medical misinformation. Really?

Since when is stating a fact misinformation?

Once I clicked their OKAY button that was on that form… well, I received the following prompt. 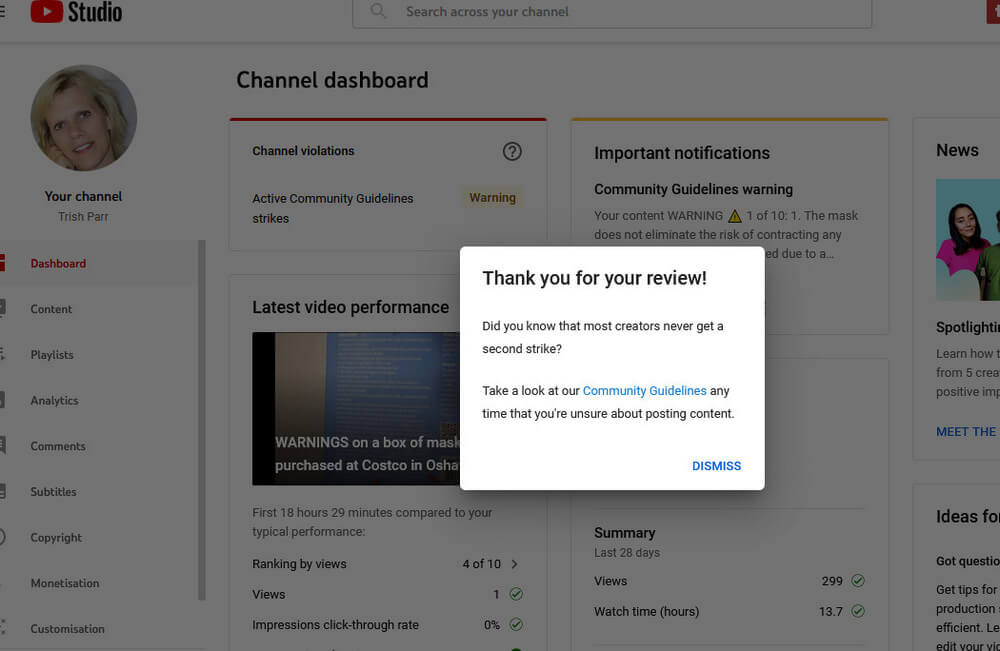 That warning is a threat to my YouTube channel.

If I commit one more sin like this one, they will shut my entire YouTube channel down. So, off to Rumble video hosting server I will go… no problemo’!

The video in behind this last warning, is a short video displaying the EXACT same warnings BUT with a different title, and that one is okay, thus my assumption that my title caught the attention of their auto-checker that must be looking for certain terms.

Am betting that no human will EVER look at this punishment for violating their Community Guidelines even though I took the time to fill in their form asking for reconsideration.

In checking that video on the 11th of February, I saw that they have literally REMOVED the video they claimed violated their Community Guidelines.

That’s find, I will share this same video with the SAME title and the SAME description, and then embed it in this post, though I don’t think Google will acknowledge this post in their search results… EVER.

Heck, Google may even remove my entire personal blog from their search engine. Who living in Canada even knows for sure anymore?

It does concern me to learn of all the censoring that Google has done regarding real news on the trucker’s strike that started in Ottawa. And now I find that I’m being censored for simply having shared printed warnings on the side of a box of face masks that I purchased from Costco.

I was born in Canada and have NEVER moved, yet many times now I feel though I’ve awakened many years later in China!

And… I’m not alone feeling the wrath of YouTube’s censorship either.

Guess I should be able to consider myself among the elite now, as I’ve learned that many who have a PhD in medicine have had their YouTube channels removed due to their speaking about medical knowledge that they’ve been schooled in… go figure!

Anyway, as promised earlier in this rant… below is my video that is now hosted on Rumble after YouTube removed it. And before you comment about how giggly the video is… I’m sorry, but I was holding the camera in one hand while recording this.

1 of 10: 1. The mask does not eliminate the risk of contracting any disease or infection

Below is the actual warning that is found on this box of masks. I have highlighted in YELLOW the key statements that I feel we need to be aware of.

1. The mask does not eliminate the risk of contracting any disease or infection.

2. Failure to properly use and maintain this product could result in illness or even death.

3. Only for one-time use, please destroy and dispose according to regulations after use.

4. Please use within the validity period.

5. DO NOT use if package is damaged.

7. Use this product immediately after the package is opened. Avoid hand contact within the interior part of the mask. Do not wash.

8. Intended for use in environments with moderate fluid exposure.

9. This face mask is authorized for distribution under FDA enforcement discretion only for the duration of the declaration that circumstances exist justifying the authorization of the emergency use of face masks under section 564(B)(l) of the Act, 21 U.S.C § 360bbb3(b)(l) unless the authorization is terminated or revoked sooner.

10. THIS MASK IS NOT A RESPIRATOR OR A SURGICAL MASK. It is NOT FDA cleared or NIOSH approved and it may or may not meet fluid barrier or filtration efficiency levels. It is recommended for use only by the general public. It is NOT recommended for use in: (1) any surgical setting or where exposure to liquid, bodily or other hazardous fluids may be expected; (2) a clinical setting where there is an infection risk through inhalation exposure; or (3) This product does NOT eliminate the risk of contracting any disease, infection or virus.

In case you’re still wondering why I shared this warning… well, if these masks do NOT protect us FROM the virus AND it won’t stop exposure to liquid, bodily or other hazardous fluids when we THINK we’re protecting others, then what is the point of us being FORCED to wear these masks that are polluting our environment?

Looking at this case objectively, it might have been the title that triggered YouTube’s censoring… and I say that because, I was having trouble getting the printed warnings focused in the video above, and so I took a picture of the side of the box, making the print a lot more legible.

After creating the first video, I decide to make the image into a short video, knowing that YouTube recently encouraged YouTubers to create what they call “shorts”, figuring they might help make this video popular.

Below is the short video that I created, where ONLY the title has been changed, and it is STILL hosted on my YouTube channel.

The description is EXACTLY the same as the first video. And at the bottom of EACH video’s description, I offered a URL to the other related video, in hope of giving each video more authority.

HUH, so much for that idea, right.

Thank YOU Rumble for providing a platform in which it is perfectly acceptable for me to share the Warnings that are clearly shown on the side of a box of face masks that I purchased at Costco.

Given Google’s YouTube censoring of personal videos now (even those that simply share information that is already out there for the public to see in a different format), I will be sharing my video rants and raves on Rumble from now on.

Oh wow, did you know that Rumble is developed with YouTube?!

Perhaps this is Google’s way of skirting around potential lawsuits from ANY government going forward; Because they sure have removed a lot of information from their search engine that showed the truth about many events that took place during the trucker’s strike that is now being deemed a protest, that started in Ottawa, in late January 2022.

Do a quick search in DuckDuckGo.com and you’ll soon see for yourself what I mean when I say this.

Oh, how I tried to warn Canadian voters waaaaay back in 2015: Before you vote, ask yourself this …but STILL most readers failed to actually read through the comparison table provided that showed each of the different party’s promises.

I can say this in good conscience, because if they had of actually read and clicked on all of the links that were “live” back then, well, Canada would NOT be in the mess we are now, of that I am certain.

Back in 2015, many of the people I spoke with thought that what The Toronto Star Newspaper stated in condemnation of the best Prime Minister that Canada has ever had during my lifetime on planet earth, simply to sell more newspapers.

This only served to prove to me that the media really DOES tell most voters WHO to vote for. Sad but seemingly true.

While others wanted marijuana legalized, and they were willing to do ANYTHING to get what they wanted, even though those SAME people now regret that they voted for the wrong leader. 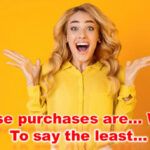