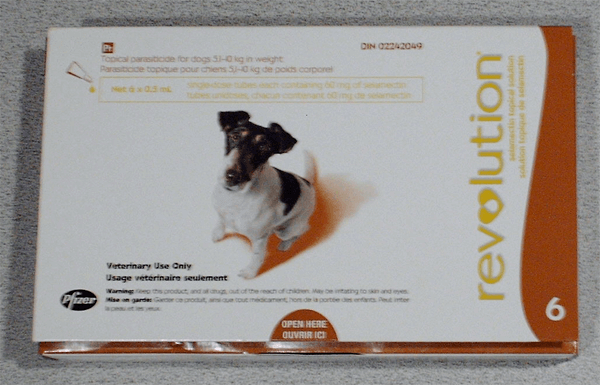 My precious, little Nugget was born 13 June 2002, a very lucky number for me.

On April 2005, I was introduced to a “new” product for flea, tick and mite control and heart worm prevention, called Revolution… a liquid that was to be applied to my dog’s back, between his shoulder blades, once a month.

I’ve learned that Revolution contains a medication called selamectin which enters the dog’s bloodstream through the skin, and is suppose to help prevent parasites.

Starting about September 2008, Nugget started waking up during the night, vomiting. After the third (or maybe four) time within about a month, his vomiting stopped. I reviewed his diet, and NOTHING new had been introduced. I could see no obvious reason for his vomiting, and decided not to panic, especially given that by October his vomiting stopped completely.

Come late September 2009, Nugget started vomiting during the night again, this time with blood in his vomit. Again, nothing new had been introduced to his diet. After much searching the internet I discovered that honey was a good treatment to settle his stomach down. This seemed to work as by end of October that year, Nugget was no longer vomiting.

I was going through a very traumatic time back then. I was being pushed out of the workplace, and had thought perhaps it was stress on Nugget that was causing this episode of vomiting. Again, his vomiting stopped by mid-October 2009.

Then in about August 2010, Nugget started vomiting so violently that I took him to his Vet, and the Vet could not discover an obvious reason why he was vomiting either. The Vet ran several blood tests.

It was discovered that Nugget was having issues with his kidneys. His Vet put on 3 capsules of nutrients daily to be taken with food… to help his kidneys function better and, he was put on a low protein diet. By late October 2010 all signs of Nugget’s vomiting had stopped once again, and his health showed improvement.

In July 2011, Nugget suffered an eye injury to his right eye. The injury looked though his eye had been poked with a very thin, sharp object. He had a terrible habit of slamming his face to the ground in longer grass. Eye drops were required several times a day, though finding the correct solution was quite an ordeal.

All the while, every summer like clockwork, I would start Nugget on a treatment of Revolution until the 6 tiny, tube-like containers were used up.

In late September 2011, Nugget started vomiting violently… again. More blood work was done and Nugget was put on liver medicine that turned him off eating all together. I had a heck of a time getting Nugget to eat, but was able with much coaxing… and sometimes even force feeding him, to get enough food into him to keep him going.

Early in November 2011, Nugget started screaming. He screamed so loud and for so long that he scared me. I took him to his doctor. I explained that I could not find anything wrong with him. He didn’t fall, or hurt himself, he just started screaming during my telephone conversation with my cousin. I was so afraid, I remember saying to my cousin that it sounded though I’d have to put him down to stop his pain.

The Vet x-rayed Nugget and could find no reason other than excess gas that might be causing his pain. They kept Nugget in the hospital for three days, giving me a much need break… and, in order to keep a closer watch on Nugget.

Three days later, when I went to pick him up, I nearly fainted! Both of his eyes were coated in a white haze. I was told that this was caused from his screaming for three solid days.

Nugget now had to receive special eye drops put in BOTH his eyes every 4 hours. Never mind that he was temporarily blind ta’boot!

One very long story shortened here… …and zooming ahead now to April 2012; while I was outside playing in our backyard with Nugget, he started shivering, yet still wanted to continue playing. I felt that was odd behaviour so stopped playing, came back inside and called the Vet’s office

After speaking with Julia, she said yes, this was odd behaviour and she suggested I bring Nugget in later that day… which I did.

Nugget was x-rayed once again. This time, you could clearly see a mass that looked to be just above his liver… the size of a golf ball. The doctor immediately scheduled Nugget for an ultrasound in order to determine where the mass was located, what type of mass it is and and then they could determine proper treatment.

17 May 2012, Nugget had his ultrasound, where it was discovered that he had a mass on the outside of his spleen 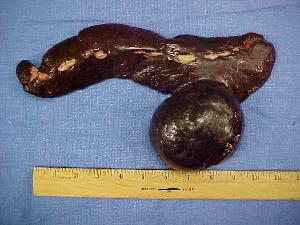 the size of a golf ball (like that in the image to your viewing left) and another one on the inside of his spleen. Surgery to remove his spleen was recommended.

On 22 May 2012, Nugget had his spleen removed… and our ever caring doctor (seriously!) called me immediately to let me know that Nugget was safe from that surgery. Don’t think I’ve ever been so happy to be able to hug my little Nugget. I am ever so thankful to Nugget’s Vet and his staff, for saving Nugget’s life.

All the while Nugget was in surgery, I was searching the internet for why this happened… that’s when I discovered a web page that offered the truth about Revolution…

Paragraph in the image above was snagged from: https://animalhealth.pfizer.com/sites/pahweb/US/EN/Documents/Species%20Landing%20Page%20pdf/Dog/REVOLUTION_PI.pdf

And then, of course, there’s this warning of side-effects (note the highlighted word in the image below):

If you think my suspicion is unwarranted, please read the posts published at the links below before fluffing this off:
1.) Bad experience revolution
2.) 5 Side Effects of Revolution for Dogs
3.) Pet deaths prompt warnings on flea meds
4.) Google search results for “dog health issues using revolution“.

Only wished I’d done my researching after smelling the chemical scent of Revolution. 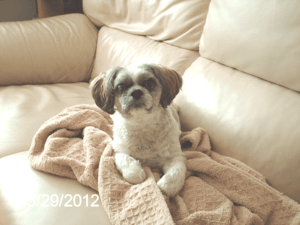 local factory. Why the heck I didn’t question the Vet’s recommendation once I had smelled Revolution, I’ll never understand.

Nugget’s spleen was tested and proven to be benign, and he has healed quit well, and is back on a normal diet now; though still being treated with drops every four hours for his right eye. Perhaps he’ll have full vision restored by June 2013. Time will tell.

Please, let my post here serve as your warning. Let it not take your dog becoming deathly ill before you learn the truth about Revolution!

UPDATE: On 20 May 2014, my precious Nugget was anesthetized due to further complications with his health that were no longer able to be treated.

UPDATE: 08 Aug 2017 Evelyn (comment below) was kind enough to stop by to inform us all to NOT use NexGard for our pets. Here’s a product review on NexGard chewables: https://www.productreview.com.au/p/nexgard-chewables.html One death is one death too many! You may also want to review” NexGard (Afoxolaner) Toxicity

Checked HeartGard too and though there have been no reported deaths … this stuff DOES make me wonder if we’re not contributing to the short life span of our pets when using it too. 🙁 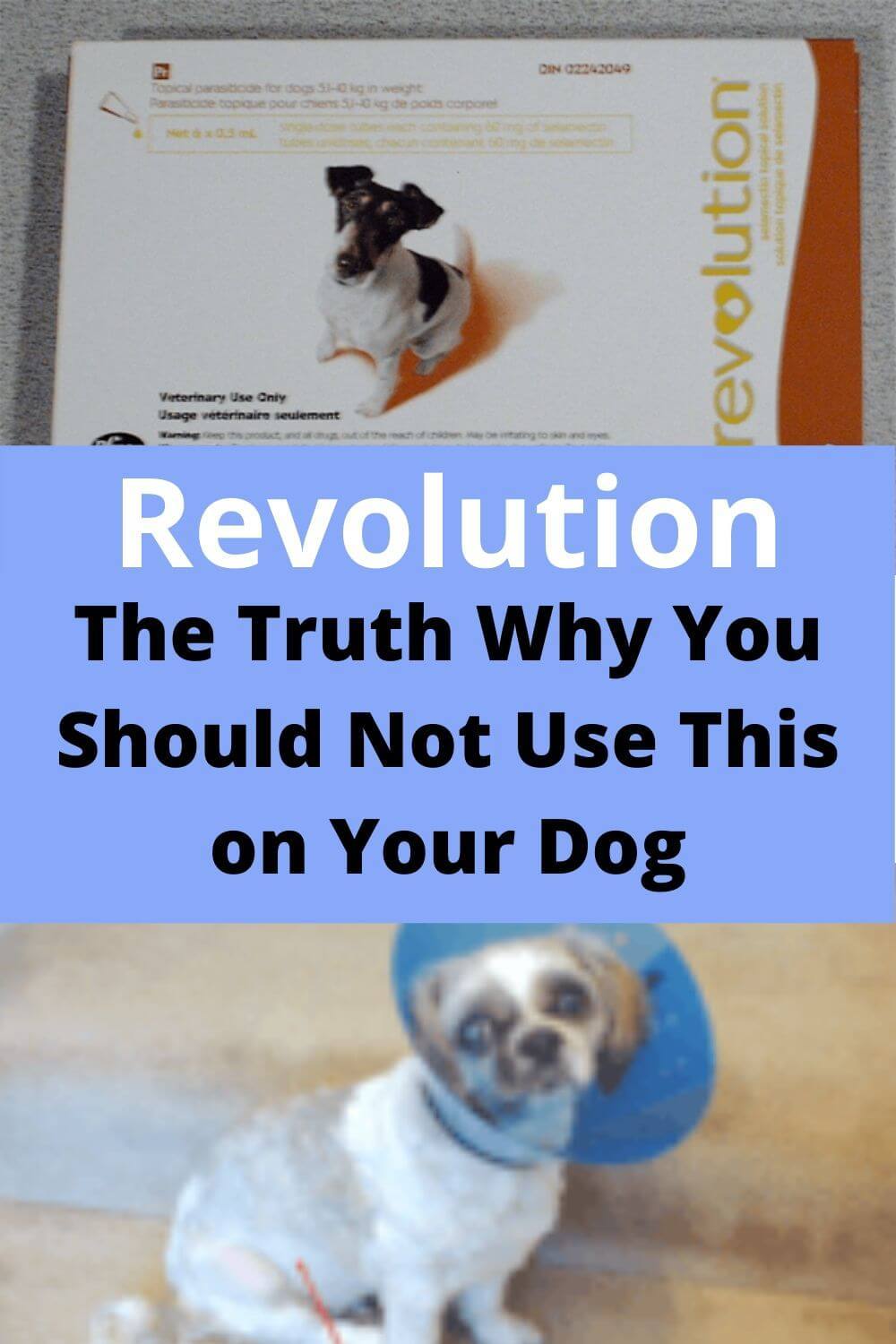 The Truth About Functional Fitness Solution – Can You Really Restore Your Vitality?