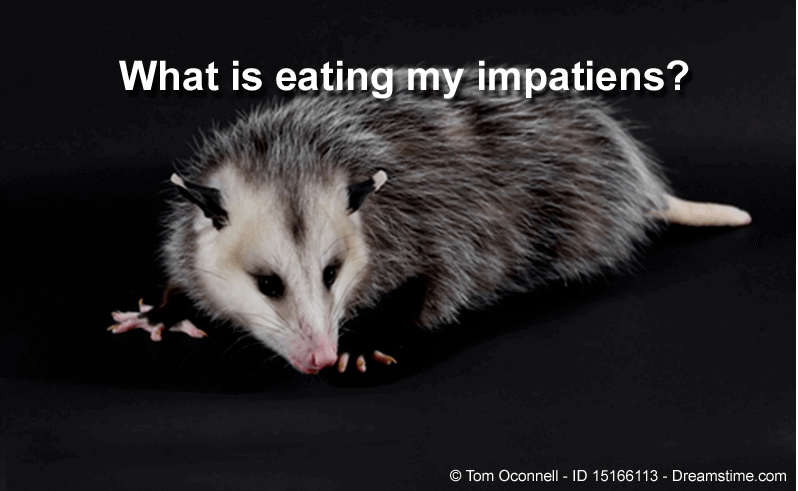 After the second week of attacks on my impatiens, I started asking neighbours if they were suffering a loss of flowers, but nope! One neighbour claimed that even the rabbits have been leaving his veggie garden alone this year. Many of my neighbours must have thought I was crazy, I mean, what animal would want to eat impatiens only? …though it did eat off the tops of white daisies that had already gone to seed.

I spent far too much money on impatiens back in May and June 2011. Then in July, we suffered high temperatures and no rain, forcing me to water my gardens nightly in hopes of saving my flower garden. On the second week in August of 2011, this nightly predator started attacking and eating my impatiens; some were eaten right down to the ground.

The critter would remove all the light coloured blossoms one night, then the leaves the next night, then start on the stems the following night. I have to give the critter credit; it wasn’t wasting anything by eating the plants clear on down to the roots! And though it preferred the lighter coloured impatiens at first, it did start eating the dark red and orange impatiens once they were all that was left.

Suspecting at first that it to be a malnourished rabbit, I purchased a Havaheart trap and stocked it with fresh leaves of lettuce, and then laid fresh pieces of carrots on top of the lettuce. Three nights I set this cage up with fresh veggies… and, for three nights the critter walked right passed the cage and continued devastating my impatiens.

My Internet searches proved fruitless, and in chatting with a girlfriend who lives out in the country, she suggested it sounded more like something a ground hog would do. Ahuh! Finally… I’m REALLY not going crazy!

So, it was then off to Lowe’s I went. I purchased wire fencing which I attached to the bottom of my wooden fence, all along on the north side of my back yard, as that’s where it looked though this critter was coming into my yard from. For two nights, the critter did NOT return.

On the third night the critter returned and ate with a vengeance! More impatiens were eaten than on previously nightly visits. I wondered if the critter might have brought friends. Worrying about it becoming rabies season, I called City Hall for help, and the receptionist read off a canned statement they’ve given her to read out to those who call for help, which virtually states; “it ain’t their job, call the provincial wildlife authorities”. Wow! Remind me again…. why am I paying property taxes?

Another Internet search today, and voila! I hit the jackpot. I came across Douglas Allen’s story posted at en.allexperts.com that was posted back in 2009. He TOO had been treated though he was crazy… what animal would eat only impatiens. Thanks Douglas!

Between a raccoon trying to chew its way into an outbuilding, leaving poo on the roof of a connected building as evidence… and, what appears to be the work of an opossum (impatiens eaten), I’ve been forced to hire help. Thank God for Stephen Paris at Back To The Wild 905-914-3400, who came to my rescue to remove the raccoon, and, prove Douglas right by capturing on a motion sensitive camera what I’m SURE will prove out to be an opossum!

Steve informed me, opossums climb fences just like cats do. Capturing and relocating them wouldn’t work in the long-term.

Just so you know not to confront an opossum, should you catch sight of one in your yard, check out this video:

UPDATE September 2011: No night critter was captured on the camera placed in my garden for one week. Reason being, impatiens were all but lost before we got to use the camera. Darn!

Next year… NO IMPATIENS in my garden :-(… I’m fed up with opossum damages. Cost is waaaay too high.

I decided to post this in case allexperts.com should remove Douglas Allen’s post. If like me, someone decides to search online for what animal eats impatiens, well, this way at least you’ll know you’re not alone!

UPDATE August 2012: Think I found a resolve to our shared dilemma, so be sure to read through the comments below. Hopefully there’ll be a product on it’s way to Kingsway Greenhouses for 2013!

UPDATE August 2014: Do opossum live in Ontario? You BET they do. To answer your question, here is a local newspaper’s story on this topic.

On the morning of July 31, 2014, there was a dead opossum in the middle of Highway 2, near the Oshawa and Whitby border.

If you’d like to read about other’s experiences with opossums, please, read this: The Straight Dope forum

Other’s suggestions
Getting Rid of Opossums for Good 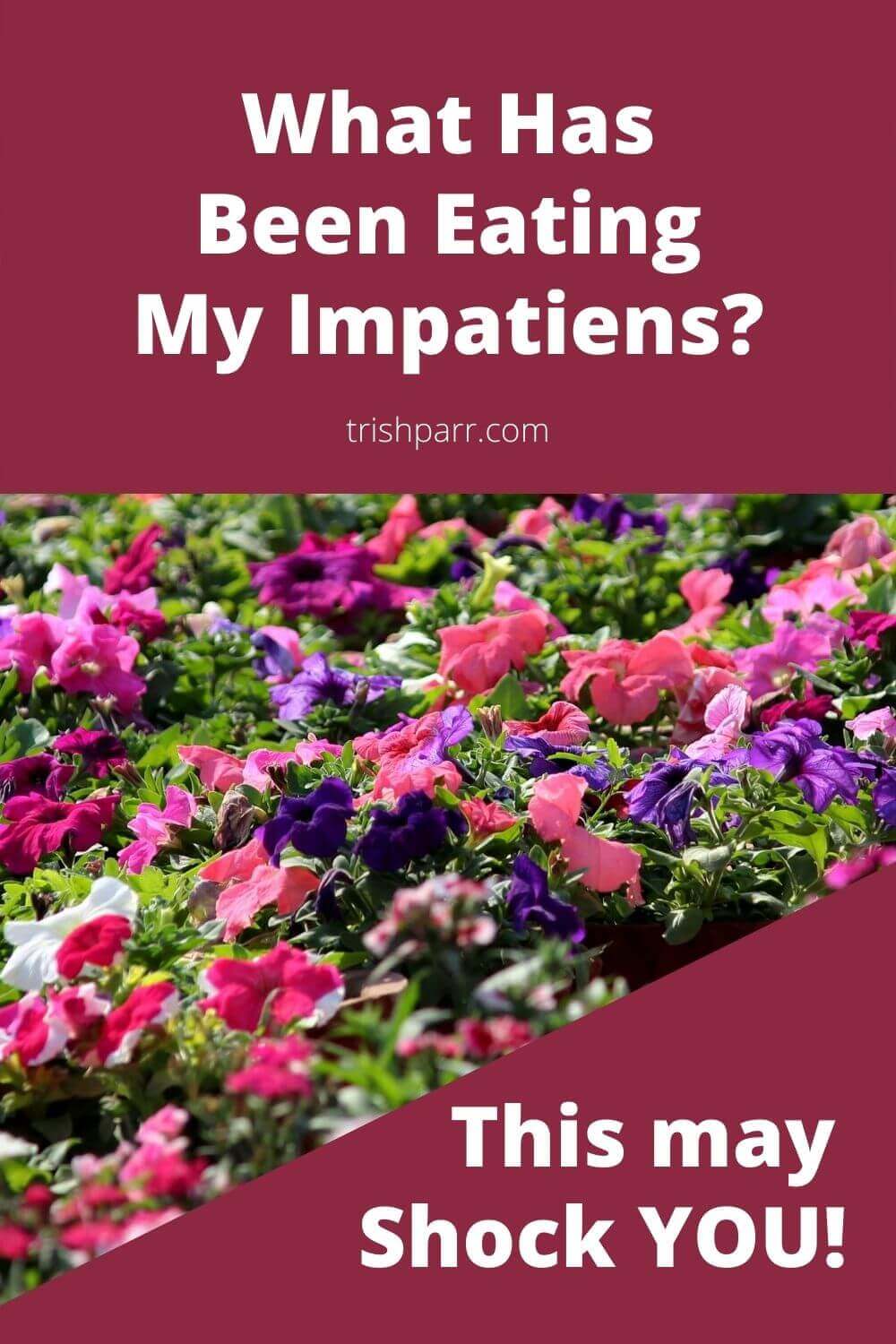 Queen of the Night Houseplant

57 thoughts on “What Animal Eats Impatiens Only? You’re Not Alone…”